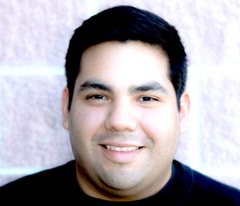 ​Erik Cavazos is the new Orchestra Director in Alamo Heights ISD, focusing primarily on High School ensembles.  Erik graduated cum laude from the University of Texas at San Antonio (UTSA) with a bachelor's degree in music education and a certificate of performance in violin- his primary instrument. While an undergraduate student, he studied violin and viola with Dr. Stephanie Westney, cello with Ken Freudigman, bass with Steven Zeserman, and pedagogy with Dr. Kristen Pellegrino. During summers, he traveled to participate in festival orchestras in Hot Springs, Arkansas, and a tour in Italy as a soloist for the Vivaldi Concerto for 2 Violins in A minor, including performances in Venice, Rome and Florence.

In addition to this position at AHISD, Erik is also a Master Teacher for the UTSA String Project where he helps undergraduate music education students refine their classroom teaching skills. Erik is also on the Committee of Educational Outreach for the Chamber Orchestra of San Antonio Music Institute (CMI) and is the conductor of the Youth Orchestra of San Antonio (YOSA) Sinfonietta Orchestra. His professional affiliations include Texas Music Educators Association (TMEA), Texas Orchestra Directors Association (TODA), and Phi Mu Alpha Sinfonia National Fraternity. 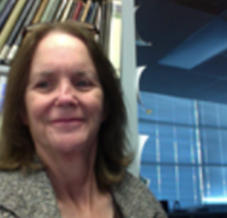 Du Anne Hamby
Email: hamby@ahisd.net
Website: http://webfc.ahisd.net/~hamby/
A former member of the San Antonio Symphony, Du Anne Hamby is presently a strings teacher at Alamo Heights ISD and Director of the Youth Orchestras of San Antonio Summer Music Camp.  Du Anne﻿ attended the New School ﻿of Music in Philadelphia (now the New School Institute at Temple University’s College of Music). At New School she was privileged to study with Max Aronoff of the Curtis Institute of Music and Curtis String Quartet. Du Anne is a graduate of Philadelphia Biblical University and holds degrees in music and theology. She also founded StringMusic.net, which provides string quartets for weddings and special events.  Du Anne and her husband, Robert, have three grown children: Mary Alice, Jesse, and Stephen. 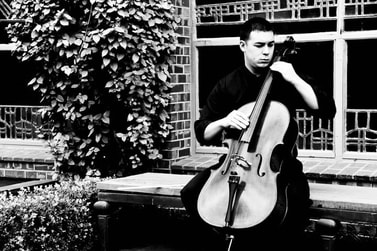 Mr. Younke playing cello in college.
Joshua Younke
Email: jyounke@ahisd.net
Mr. Younke is the strings teacher at Woodridge and Cambridge Elementary Schools.  He loves strings, but it didn't start out that way.  He was easily the worst cello player in NISD at the after-school strings program when he was 10 years old.  And for the next four years, he didn't exactly improve, as his mother made it a point to go outside and garden whenever he practiced at home.  But one day, his fingers and mind clicked, and he began making beautiful music.  Mr. Younke got a BA in Music at UTSA, and studied with Ken Freudigman, principal cellist of the San Antonio Symphony.  He has also performed with many bands of all genres, from punk to jazz, and has performed with five symphonies and recorded tracks from songs to commercial scores.  He has also privately taught dozens of young cellists, many having received music scholarships to great schools.  He feels like Jack Black in the movie, School of Rock, teaching at Woodridge and Cambridge.  He believes the children are sincere, honest and excited about learning music. 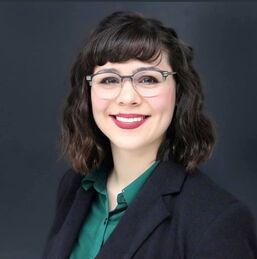 Ellen Kidwell
Email: ekidwell@ahisd.net
​
Ms. Ellen Kidwell as the new Head Director at Alamo Heights Junior School. Ellen comes to us from Bush MS and is a graduate of UTSA where she received her Bachelor’s degree in music and Certificate of Violin Performance 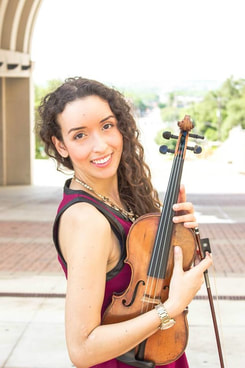 Lana Gil
Email:  lgil@ahisd.net
Lani Gil is a new junior school strings director at AHISD. Gil was born and raised in San Antonio and is a graduate of Winston Churchill High School. She started playing violin at age 10 through the public school program. She is a graduate of Texas State University with a degree Bachelor of Music Education, and a Suzuki-certified teacher who runs a private studio in her home. She loves to travel, try new foods and dabbles in photography.  Lana also has a blog!  Check it out at www.ahjsstrings.weebly.com 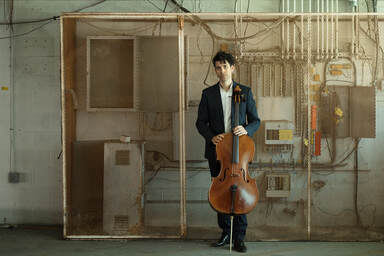 Ignacio Gallego Fernández
Email:  jgallego@ahisd.net
The Spanish-American cellist Ignacio Gallego Fernandez has an active performance career that has taken him around the world, from Europe to Asia to the Americas.
As a select scholarship recipient from the Spanish government, Ignacio received his Bachelor of Arts from the Manhattan School of Music in New York as a student of Nathaniel Rosen and Marion Feldman. After receiving a scholarship to Indiana University, Bloomington’s Jacobs School of Music, Mr. Gallego completed his Masters of Music degree, where he was a disciple of Janos Starker and a member of the prestigious Kuttner Quartet. He furthered his education at Indiana University by obtaining a Performance Diploma under the tutelage of Eric Kim.
Recent career highlights include solo appearances with the National Orchestra of El Salvador, which culminated in a solo recital at their National Museum of Art and solo performances with the Youth Orchestra of the Americas tour of China. Ignacio has also performed several times  at Carnegie Hall, including a solo performance as part of the 100th year celebration of the Hispanic Society of America. Ignacio can also be heard in one of the latest Mercedes-Benz commercials.
Ignacio resides in San Antonio, Texas where, along with being a founding member of Agarita, he is Assistant Director of the Strings Program at Alamo Heights High School. He is a familiar face in the cello section of the San Antonio Symphony and maintains a distinguished private studio.
Powered by